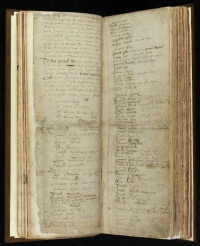 Edinburgh University opened its doors to its first class of students in October 1583.

The Foundation of Edinburgh University

Following Bishop Robert Reid’s bequest of funds to found a college of higher learning in Edinburgh in his will of 1558, the Town Council of Edinburgh was determined to establish a university in the capital. Edinburgh was now firmly the centre of administrative, religious, and legal power in Scotland, and there were growing calls for an institution to train future ministers, lawyers, and state functionaries. In the wake of the Scottish Reformation of 1560, the Town Council hoped that monastic sites and revenues in Edinburgh might revert to them and be employed for educational purposes. In August 1562, they thus petitioned Mary, Queen of Scots to grant them the site of the former Collegiate Church of Mary in the Fields (or Kirk o’ Field) ‘to build a school’. Mary’s response was a vague promise to supply a suitable site for a college in future, and the Council was forced into ultimately fruitless negotiations with William Penicuik, Provost of Kirk o’ Field, who was disposed to sell the site. In a charter of 13 March 1567, Mary eventually granted all monastic property in Edinburgh to the Town Council, but stipulated that it would be for the support of Protestant ministers and the poor, and that all present incumbents would enjoy a life-rent of the benefices. Little progress was made over the years of civil conflict which followed Mary’s abdication in 1568, and in the face of opposition from the Bishops of Aberdeen, Glasgow, and St. Andrews who opposed the establishment of an institution which might compete with the universities already established in their dioceses. 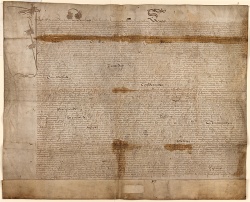 Charter of Novodamus under the Great Seal (the seal itself is not present), on permanent loan from Edinburgh City Council (Edinburgh City Archives, 'Historical Charter Number 65'). EUA GD4

Plans to establish a university were eventually revived in the late 1570s, thanks to the efforts of James Lawson (1538–1584), Knox’s successor as first Minister of Edinburgh, and allies such as advocate Clement Litill (founder of Edinburgh University Library), and his brother William Litill, future Provost of Edinburgh. The Town Council set up a committee in 1579 to investigate the possibility of siting a school in or near the old Trinity Collegiate Kirk, and when this plan was thwarted, reverted to the original plan of siting the college at Kirk o’ Field. In November 1579, Robert Balfour, Penicuik’s successor as Provost of Kirk o’ Field, was forfeited by Parliament as an accessory to the murder of Darnley. The Council hoped that Kirk o’ Field would immediately be granted to them, but James VI gave the provostry as a gift to his valet John Gib. Gib, however, proved willing to sell, and the Town was finally able to purchase Kirk o’ Field in 1581. The temporary abolition of the episcopacy between 1580 and 1584, aided the Council’s scheme, by neutralizing the opposition of the Bishops of Aberdeen, Glasgow, and St Andrews. In April 1582, James VI, petitioned by the Town Council, issued two charters. The first (11 April 1582) empowered the Town Council to recover the money bequeathed by Reid for establishing a college, which remained unpaid by his heirs. The second (14 April), extended Mary’s charter of 1567 to permit the town to use monastic properties for educational purposes, empowered the Council to appoint and remove professors and to build houses for their accommodation, and ratified the sale of Kirk o’ Field to the Town.

The chief college building was to be Hamilton House, a mansion built by James Hamilton, 2nd Earl of Arran, Duke of Châtellerault, and Regent of Scotland during the infancy of Mary Queen of Scots. It had been erected on the site of a hospital belonging to Kirk o’ Field, which had been burnt down during the Anglo-Scottish conflict of 1543-50 (the ‘Rough Wooing’), and which Hamilton had bought in 1555. The house was confiscated after Hamilton’s family suffered forfeiture and eventually purchased by the Town Council. It was not itself, then, covered by Mary’s Charter and James’s confirmation, and would subsequently expose the university to a challenge from the Hamilton family, to whom it was forced to pay compensation. The interior of Hamilton House was refurbished so as to supply class-rooms, a college hall, and seventeen sleeping chambers for students. It was the intention of the Town Council (as expressed in a resolution of 8 November 1583) that students would reside within the college walls. However, even in the earliest days Hamilton House could not have accommodated more than a third of the student populace, and most must have taken lodgings in town. 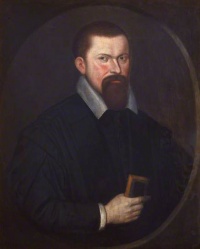 The Town Council next looked for a regent who, in the first instance, would be solely responsible for all teaching and administrative duties. At the recommendation of James Lawson, they turned to Robert Rollock (1555-1599), who had been educated at St. Andrews University and employed there as a Regent of Philosophy since 1580. He had acquired a fine reputation, not only for the quality of his teaching, but for the piety that he instilled into his pupils’ minds. Having responded favourably to Lawson’s overtures, Rollock was interviewed by the Town Council and appointed Regent, initially for a one-year period, on 14 September 1583.

On 16th October 1583, the Town Council appointed a committee to devise a curriculum for a four-year Master of Arts degree in consultation with Robert Rollock. The resulting course of studies was greatly influenced by the humanist reforms introduced by Andrew Melville at the Universities of Glasgow and St Andrews. First-year students studied Latin and Greek grammar and Ramist logic; the second year gave a further grounding in classical authors, and introduced students to rhetoric, Aristotle's philosophical treatises, and arithmetic; the third year was devoted to Hebrew grammar, logical analyses, and the works of Aristotle; the final year covered logic, physics, geography, and philology. An innovation more particular to Rollock was the teaching of human anatomy.

Opening of the University

All classes were to be taught in Latin, so the Council’s next act was to organize an entrance examination, to ascertain that potential students had sufficient Latin to follow Rollock’s teaching. This was conducted on 11 October 1583, and a considerable number of applicants failed. On Rollock’s advice, they were not absolutely excluded from the College. A tutor, Duncan Nairn, was employed to bring their Latin up to the standard over a preparatory year, which would not count as part of their four year curriculum for graduation The College opened on 14 October 1583, with an attendance of 80-90 students, of whom 50-60 were in Rollock’s class, and the rest in Nairn’s preparatory class.

Under the regenting system, which prevailed in Scottish universities from the Middle Ages to the early 18th century, a teacher took the same class through all four years of their degree course, teaching all subjects himself. Thus when the 1583 intake finished their first year (or ‘Bajan’) class, they remained with Rollock for their second year (in which they were called ‘Semies’ or ‘Semi-Bajans’). The new Bajan (from French 'béjaune' = 'fledgling') class was taught by Duncan Nairn, who had previously tutored them in Latin during their preparatory year. In May 1585, plague broke out in Edinburgh, and the College was disbanded until February 1586. When lessons resumed, Rollock’s class entered directly into a truncated third year, where they were known as ‘Determinands’. Duncan Nairn had died in February 1586, and Charles Lumsden took over the second year class. There was no fresh intake of Bajans until October 1586, when Alexander Scrimger was appointed as a new regent. Rollock’s class now entered their final year, where they were known as ‘Magistrands’. At this point, the university’s staff consisted of three regents: Rollock, Scrimger, and Adam Colt who took over the teaching of Lumsden's class. (There was no Semi-Bajan class, as there had been no Bajan intake during the truncated academic year 1585-86.)

The regenting system functioned until 1708, when it was abolished as part of the programme of reforms introduced by William Carstares (1649-1715) as Principal of Edinburgh University. In an effort to remodel Edinburgh University along European lines, Carstares persuaded the Town Council (16 June 1708) to abandon regenting in favour of a professorial system that assigned each of the subjects on the Master of Arts curriculum to a single teacher. The newly created chairs were offered to the existing regents.

At the end of the 1586-87 session Rollock’s class graduated or ‘laureated' with the M.A. degree. Forty-seven Magistrands were examined by Rollock himself and then given their degrees. In following years, the principle was established that no regent would examine his own class, but it was impractical at this embryonic stage of the university’s development. Each graduate signed the 'sponsio' or Confession of Faith (sometimes referred to as the National Covenant) of 1580 in the university's First Laureation Album. The 'sponsio' was also signed by each new regent upon taking up employment with the university. The first two regents to sign the 'sponsio' were Rollock and Duncan Nairn in 1585. The first student signatory in Rollock's 1587 laureation class is Thomas Stewart. Often notes as to graduate's future careers were subsequently added in hand, e.g. 'minister verbi'. In Stewart's case an MS note reads 'apostata', suggesting that he abandoned the Protestant faith.

Rollock as Principal and Professor of Theology

Rollock did not, recommence the regenting cycle with a new class of Bajans. In February 1586, he had been appointed Principal of the College, and was now removed from the everyday tutoring duties. (Philip Hislop was appointed to the vacant regentship, and in 1589 a fourth regent Charles Ferme, was added to the college staff, taking that year’s Bajan class.) Up to this point, the university’s teaching had essentially focused on philosophy. Arrangements were now made, however, to provide instruction in divinity. In November 1587, the Town Council appointed Rollock Professor of Theology with the consent of the Presbytery of Edinburgh. In this capacity, he did not offer a degree course in Theology, but taught graduates in Arts who wished to stay on to prepare for the ministry.