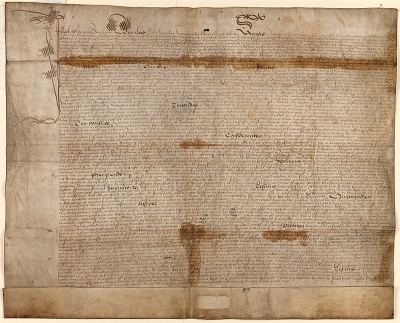 Charter of Novodamus under the Great Seal (the seal itself is not present), EUA GD4 (on permanent loan from Edinburgh City Council (Edinburgh City Archives, 'Historical Charter Number 65'))

The Charter of Confirmation and Novodamus signed by King James VI on 14 April 1582 led to the opening of Edinburgh University in October 1583.

Ratification and Extension of Mary's Charter of 1567

The document is not strictly a charter of foundation. It confirmed and extended a previous charter signed by James's mother, Mary, Queen of Scots, on 13 March 1567, which had granted the Town of Edinburgh all the lands, buildings, and revenues formerly belonging to the monastic orders abolished during the Scottish Reformation of 1560. These were to be used for the support of the city's clergy and the poor. King James's charter ratified Mary's gift but also authorised the Town Council to spend the income from the former ecclesiastical properties on a college of higher education.

The document first stipulates that the ecclesiastical properties and revenues gifted by Mary may now also be employed for educational purposes:

Therefore we give concede and dispone to the aforementioned provost, bailies, councillors and community of our said burgh of Edinburgh and all their successors all and whole aforenamed lands, tenements, houses, buildings, annual rents, chapels, places, gardens, orchards, feu fermes, profits, emoluments and other above specifications respective and particular having to be applied by them forever in sustentation of the ministry, in aid of paupers, in reparation of the schools, in propagation of reading and knowledge, following their judgement and that of their followers, as will seem most convenient to them' (translated from Latin by Janet Foggie)

It went on to empower the Town Council to build schools and colleges on the sites and grounds of the former religious houses. It notes:

eagerly longing for the increase of reading in honour of God and for the common good of our reign, we desire and concede that it will be allowed to the aforementioned provost, councillors and their successors to build and to repair sufficient houses and places for the reception, habitation and teaching of professors of the schools of grammar, the humanities and languages, philosophy, theology, medicine and law, or whichever liberal arts which we declare detract in no way from the aforesaid mortification

The Town Council were granted the right to appoint and to dismiss college staff in consultation with the Ministers of the City's Kirk:

and also the aforementioned provost, bailies and councillors and their successors, nevertheless with the advice of their ministers forever in posterity, will have full personal freedom to choose appropriately persons most suited to give the mentioned lessons with powers of imposition and removal to themselves as is most expedient with the most purpose to the best end

The Town Council of Edinburgh was to retain this right until the Universities (Scotland) Act 1858 transferred it to the University Court.

Further clauses of the charter ratified the Town Council's purchase of the former Collegiate Church of St Mary in the Fields ('Kirk o' Field') and empowered the Town Council to accept endowments for the 'sustentation of schools' and 'advancement of sciences and learning'.

Empowered by James's charter, the Town Council went on to convert Hamilton House on the site of Kirk o' Field to provide class-rooms, a college hall, and seventeen sleeping chambers for students. On 14 September 1583, they appointed Robert Rollock (1555-1599) as the first Regent of the University. One month later the newly founded university opened its doors to its first students.