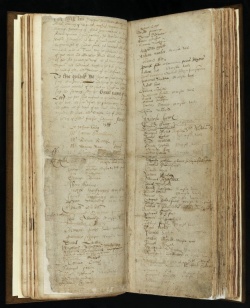 First Laureation & Degrees Album, showing the graduation of the First Class in 1587

This album begins with the text of the 'sponsio' or confession of Faith (sometimes referred to as the National Covenant) of 1580, to which the graduates subscribed, and which continued to be subscribed to by Professors and Students for many years. The entries for laureations (or graduations) begin in August 1587, when Robert Rollock (1555-1599), the first Principal 'did laureat the first classe which had passed under his charge in the Colledge of Edinburgh, after every one of them had subscrybed the Covenant.'

This first class consisted of 47 students, all of whom signed their names, a practice which continued well into the 18th century. Additions were made against the names of the early graduates, probably by later Professors, adding designations such as 'minister verbi' or, for example, 'Primarius, prius Regens' against the name of Patrick Sands (c1567-1635), who was in the first class of graduates, and who became Principal in 1620. The Register records all graduates up to 1712, and medical graduates from 1710 up to 1809.The Register itself was active in the University until 1809, and it can be safely said that it played a central role in the life of the institution for over 200 years.

Many of the signatures in the volume are of key figures in the life of the University, and include those of Robert Rollock, the first Principal, William Drummond of Hawthornden, the Poet and Benefactor to the University, Robert Leighton, and Hugh Blair (1718-1800).

The album sits within our larger set of Student Records.