James Lawson (1538–1584) was the chief advocate of the scheme to erect a university in Edinburgh.

According to Sir Alexander Grant, Edinburgh University’s most authoritative historian, James Lawson is ‘the man to whom, above all others, the foundation of the University of Edinburgh is due’. Born in Perth, he entered St Andrews University in 1559, where he was a class-mate and friend of Andrew Melville, the father of Scottish Presbyterianism and future reformer of the Universities of Glasgow and St Andrews. He was subsequently employed as tutor at Paris University to the three sons of the Countess of Crawford. Religious strife in France led him to quit the Continent and pursue further studies in London and Cambridge. In February 1569 he was appointed to teach Hebrew at St Mary’s College, St Andrews, but in July of the same year was named sub-principal of King’s College, Aberdeen. 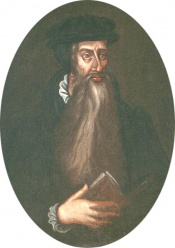 In 1572, Lawson was called to Edinburgh to share the ministry of St Giles with the ailing John Knox. Following Knox’s death in November 1572, Lawson succeeded him as chief Minister of Edinburgh, arguably the most prestigious position in the Reformed Church. In his new role, Lawson became the chief exponent of the scheme to establish a university in Edinburgh, in association with such men as William Littil, future Provost of Edinburgh, and Clement Litill, founder of Edinburgh University Library. Funds for this purpose had been bequeathed by Bishop Robert Reid in his will of 1557, but little progress had been made in the intervening years of political and religious conflict. The relative peace ushered in by the conclusion of the Marian Civil War (1568-73) led to a renewal of efforts to found what, in Lawson’s vision, would essentially be a theological college designed to combat the Catholic teaching of continental seminaries.

Through Lawson's influence, the Town Council of Edinburgh successfully negotiated the purchase of Kirk o’ Field as a site for the University (1581), and petitioned the Privy Council to force Bishop Reid’s recalcitrant executors to consign part of his request (April 1582). James Lawson also played a vital role in securing the service of Robert Rollock (1555-1599) as the university’s first Regent (and subsequently first Principal). Lawson wrote privately to Rollock at St Andrews, asking if he would be willing to take up the post. When Rollock accepted, Lawson successfully promoted his candidature at a meeting of the Town Council in September 1582.

A year after the opening of the University, Lawson was forced to quit Edinburgh for exile in England. A staunch defender of the autonomy of the church, he was closely associated with the Ultra-Protestant regime which followed the ‘Ruthven Raid’ of 22 August 1582. When the regime fell, Lawson joined Andrew Melville in condemning the so-called ‘Black Acts’ of 1584, whereby Parliament condemned Presbyteries, confirmed the power of Bishops, and granted the King supreme authority in ecclesiastical matters. Like Melville he sought refuge in London, where he died on 12 October 1584. A pro-Episcopalian purge of the Town Council ensured that the college that opened in October 1583 was far from the Reformist theological seminary that Lawson had envisaged. He is nonetheless deservedly remembered as its most tireless promoter. Perhaps less well known is his role as the university's ipso facto first librarian. Clement Litill's bequest of 268 theological works were housed in Lawson's ministerial lodgings at St Giles from October 1580 to September 1584, when they were transferred to Kirk o' Field to form the nucleus of Edinburgh University Library.