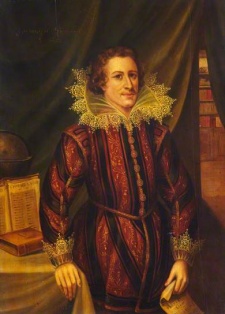 William Drummond of Hawthornden (1585-1649) made a major donation of books to Edinburgh University Library in 1626. He thus became the Library's first important private benefactor and gifted the library its first literary collection.

Drummond was born at Hawthornden Castle, near Roslin, Midlothian, the eldest son of Sir John Drummond, Laird of Hawthornden. The Drummonds were an ancient family with connections to the Royal House of Stewart. Drummond was educated at the High School of Edinburgh, then at Edinburgh University, under James Knox (d. 1633), graduating MA in 1605. From 1606 to 1608 he studied Law in Paris and Bourges. When he returned to Scotland in November 1608, he bought back nearly 400 volumes of French, Italian, Spanish, and English literature, the foundation of a fine private library. In 1610, Drummond visited London, meeting some of the most famous poets of the city. Upon his father’s death later that year, Drummond became Laird of Hawthornden and retired to the family seat, to write and to lead a life of gentlemanly simplicity.

Drummond has long enjoyed a reputation as Scotland’s foremost seventeenth-century poet. He wrote in English, not Scots, and is regarded as playing a major role in the Anglification of Scottish literature. His first published poem appeared in The Choisest Flowres of the Epitaphs (1613), followed by his first independent volumes: Teares on the Death of Meliades (1613) and Poems (1616). As his poetic reputation grew, he began to correspond with the Scottish poets at the Court of King James VI and I: Robert Kerr, Sir Robert Aytoun, Sir David Murray, and, particularly, William Alexander of Menstrie. When James VI and I visited Scotland in 1617, Drummond saluted him with Forth Feasting: A Panegyricke to the Kings Most Excellent Majestie. This led to Drummond’s work becoming more widely known in London literary circles. Ben Jonson, on a visit to Scotland, stayed at Hawthornden Castle in 1618, and Drummond recorded their conversations. In 1623, Drummond was deeply affected by the loss of his mother and the death of many friends in a famine that afflicted Scotland. His grief was expressed in his next volume Flowres of Sion (1623), a collection of religious and philosophical lyrics. 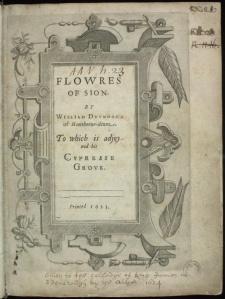 In 1626, Drummond was made a burgess of Edinburgh and in the same year made a major donation of books to Edinburgh University Library. His gift of around 550 volumes made him the Library's first significant private benefactor and gave the Library it's first literary collection. Drummond made further donations on an annual basis between 1628 and 1636. All in all, he presented some 800 printed titles and thirty-six manuscripts; around 700 volumes survive in the Library’s collection. These include some of the Library's greatest treasures, especially in the fields of literature, history, geography, philosophy and theology, science, medicine and law. They include early printings of Shakespeare, Jonson, Spenser, Drayton and Sir Philip Sidney, a complete copy of John Derrick's Image of Irelande (1581), and two early pamphlets encouraging the colonisation of Nova Scotia. It has been conjectured that Drummond was planning to withdraw from literary life at this time. He was certainly preparing to go abroad for some time on business connected with registering patents for military machines of his own invention.

From Poet to Pamphleteer

By 1633, Drummond had resumed his literary career, writing a series of pageants for the Scottish coronation of Charles I, which were printed as The Entertainment of the High and Mighty Monarch Charles, King of Great Britaine, France and Ireland (1633). In the same year, he began writing his longest work, a History of Scotland from the Year 1423 until the Year 1542 (finished about 1644, but published posthumously in 1655). From the mid-1630s onwards, however, Drummond’s energies turned to political pamphleteering. His first overly political work was a defence of John Elphinstone, Lord Balmerino, who was convicted on a capital charge of libel against the King for possessing a document thought to be treasonable. Following the signing of the National Covenant in March 1638, Drummond wrote and circulated Irene: a Remonstrance for Concord, Amity and Love amongst his Majesty's Subjects, which advocated passive obedience to the King but rejected any kind of compulsion of belief, whether Episcopal or Presbyterian. Further pamphlets, The Magicial Mirror, Queries of State, The Idea, and The Load Starre (1639) attacked the Presbyterian grip on the country and warned of the consequences of civil war. Drummond played no personal role in the Bishops’ Wars of 1639 and 1640, and in the civil conflicts that rocked England and Scotland over the following decade. His last substantial tract was Skiamachia, or, A Defence of a Petition (1643), in which he assumed an extreme anti-clerical position. Drummond died at Hawthornden Castle on 4 December 1649. Drummond’s son William and brother-in-law collaborated the posthumous printing of much of Drummond’s work. 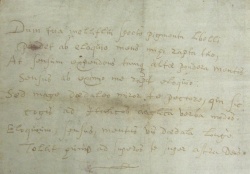 All or some of the text on this page originally appeared in the Gallery of Benefactors
Retrieved from ‘https://ourhistory.is.ed.ac.uk/index.php?title=William_Drummond_of_Hawthornden_(1585-1649)&oldid=6626’
Categories: