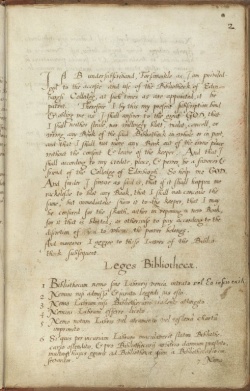 In 1636, the Town Council of Edinburgh drew up a list of rules for Edinburgh University Library and appointed Kenneth Logie as the first Keeper of the Library. The Rules stipulated that the Library should be open for reading (not borrowing) to all matriculated students who signed the oath of good behaviour in presence of the Principal, two Regents and the Keeper of the Library.

A register of members of the Library was started in the same year. The Admissions Register begins with a 'Sponsio' and the rules of the Library ('Leges Bibliothecae') to be subscribed by all readers. The first thirty-four readers were sworn in during December 1636. Despite the Town Council's stipulations, none, however, was a matriculated student. In the early years of the Library, it appears that only current or former teaching staff, Edinburgh graduates and benefactors were encouraged to apply for membership. Undergraduates, who were boys of 14-17 years old, were expected to rely on material dictated to them by their regents. Accordingly, the first group of signatories were all former regents or alumni, except James Hannay, Dean of Edinburgh. They include Andrew Ramsay, the University's first Rector and first Professor of Divinity (1620-1627. In the following year, seventeen new members were added, including William Drummond of Hawthornden, who in 1626 had gifted 363 volumes to the Library. The Admissions Register includes the signatories of all persons admitted to the use of the library until 14 November 1753.