Book stamp and seal from the library of Clement Litill, Edinburgh University Library

The theological library bequeathed by Clement Litill to the Town and Kirk of Edinburgh in 1580 is the founding collection of Edinburgh University Library.

Advocate and book-collector Clement Litill showed a constant interest in the promotion of learning in Edinburgh, and was an early supporter of the scheme to set up a college of higher learning in the capital. Having been called to the bar in 1553, he developed close professional and personal contacts with Bishop Robert Reid, President of the Court of Session, whose will provided for the foundation of Edinburgh University. Following Reid’s death, he was appointed curator to John Reid of Aikenhead, a relative and heir of the Bishop. In 1564, Litill was one of the judges on the Commissary Court when John Reid appeared with the Bishop’s nephew Walter Reid to acknowledge their role as executors of the Bishop’s will. He was therefore familiar with the terms of the Bishop’s bequest, and believed that they were consistent with the Protestant Reformers’ commitment, set out in the First Book of Discipline (1560), to establish colleges in the principal towns of Scotland.

Litill was joined in his efforts to establish a university by his brother William, an energetic Councillor and businessman. On 25 January 1579, William was one of three Councillors empowered to enter into negotiations with the Reverend Robert Pont, Provost of Trinity College, with a view to establishing a university on the College site. On 24 April 1579, both brothers were part of a committee appointed to meet with the Reverend James Lawson (1538–1584), Minister of St Giles, ‘for taking of ordour anentis the founding ane universitie’.

Discussions were still ongoing when Litill died on 1 April 1580. In his will, he left his collection of 268 theological books ‘to the kirk of Edinburgh to be usit and kepit be the said kirk to the use of the ministeris, elderis and decanes thairof’. William Litill, his sole executor, persuaded the Town Council in August 1580 that Clement had wished his bequest to form the nucleus of a public theological library, accessible not only to the clergy of Edinburgh but to divinity students and all legitimate scholars. It was agreed that the collection should be housed in the minister’s lodging adjoining the Church of St Giles and access to the books controlled by the minister himself. The attic of this building was converted to provide shelf space and a reading room, and in October 1580, the books were handed over to James Lawson, who became ex officio librarian of Litill’s collection. 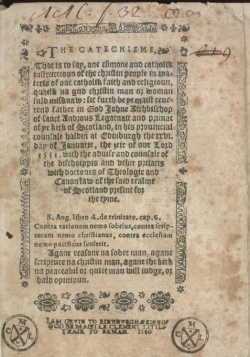 The Catechisme of Archbishop John Hamilton, 1552, the first book printed at St. Andrews, from the library of Clement Litill (Edinburgh University Library, Dd.2.33)

When Edinburgh University finally opened in October 1583, fear of provoking the notoriously fiery James Lawson may have prevented the Town Council from suggesting that Litill’s library be transferred to the university’s premises at Kirk o’ Field. A change of political regime, however, forced Lawson to flee to England in May 1584. When news reached Edinburgh that Lawson was fatally ill, the Town Council felt sufficiently emboldened to transfer the books and library fittings to Kirk o’ Field on 17 September 1584. The act making the Minister of St Giles perpetual custodian was annulled, and the Principal of the College made ex officio librarian. Despite a formal protest from Lawson’s successor, the Rev. James Hamilton, Litill’s bequest now constituted the founding collection of Edinburgh University Library.

The volumes bequeathed by Clement Litill cover both Catholic and Protestant theology and humanist scholarship. There are outstanding individual items such as the unique copy of the Sarum breviary printed at Rouen in 1496 (Dd.1.24) and the first book printed at St. Andrews, the Catechisme of Archbishop John Hamilton, 1552 (Dd.2.33). Inscriptions record the provenance of many of the books. Many were once owned by contemporary bishops like Henry Sinclair and William Scheves, and others came from the monastic libraries of the Edinburgh Franciscans and Dominicans. William Litill had each book stamped on its title page with a circular seal bearing Clement's initials and arms, and also with the inscription:

I AM GEVIN TO EDINBURGH & KIRK OF GOD BE MAISTER CLEMENT LITIL THAIR TO REMAN. 1580

A catalogue with full bibliographical details is in Charles P. Finlayson, Clement Litill and his Library: The Origins of Edinburgh University Library (1980). 243 of the original volumes are still in the library. All appear in the Library's pre-1985 main catalogue and many are now catalogued online. The collection was reconstructed in the early 19th century by David Laing (1793-1878) and many of the volumes handsomely rebound.