James VI and I

From Our History
Revision as of 10:41, 26 February 2015 by Pbarnaby (talk | contribs) (→‎Godfather to the University)
(diff) ← Older revision | Latest revision (diff) | Newer revision → (diff)
Jump to navigation Jump to search 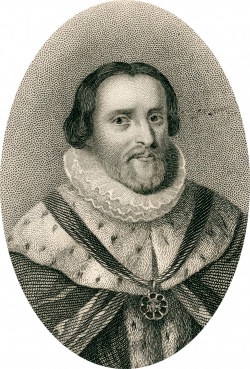 James VI and I, engraving by George Baird Shaw after the original by Paulus van Somer at the Palace of Holyroodhouse, Corson Collection, Edinburgh University Library (Corson P.575)

King James VI of Scotland (later King James I of England) signed a Royal Charter in 1582 which paved the way for the opening of Edinburgh University in the following year.

On 13 March 1567, James's mother Mary, Queen of Scots had signed a Royal Charter granting the Town Council of Edinburgh all the lands, buildings, and revenues formerly belonging to the monastic orders abolished during the Scottish Reformation of 1560. These were granted for the support of the clergy and the poor, but a clause was inserted whereby all existing prebendaries, chaplains, and friars were to retain the life-rent of their respective benefices. The Town Council were frustrated in their hope that Mary's charter would permit monastic properties to be used for educational purposes, having earmarked the Collegiate Church of St Mary in the Fields (or 'Kirk o' Field') as a potential site for a college of higher education. The Town Council nonetheless proceeded to negotiate the sale of the site with a succession of Provosts of Kirk o' Field and were finally able to buy on 30 March 1581.

On 14 April 1582, James VI issued a further Royal Charter on 14 April 1582, extending Mary’s charter of 1567 to permit the town to use monastic properties for educational purposes. The Charter ratified the sale of Kirk o’ Field to the Town and empowered the Council to appoint and remove professors, and to build houses for their accommodation. It is thus recognized as the enabling charter leading to the inception of Edinburgh University. It was issued three days after another Royal Charter had granted the Town Council the authority to recover the money left in the Will of Bishop Robert Reid, and use it, as stipulated by Reid, to set up a college of higher education. For further details and a translation of the main clauses, see Charter by King James VI, 14 April 1582.

James issued two further charters designed to boost the University's revenues and the salaries of its relatively poorly paid teaching staff. A charter of 4 April 1584 annexed the Church of Currie, with its manse and lands, to the University, in order to sustain its regents and other officials. In a subsequent charter of 7 August 1612, the revenues of Trinity College, the church of Dunbarny, and the Archdeaconry of Lothian were assigned to the University for the same purpose.

Godfather to the University 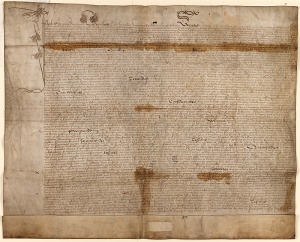 Charter of Novodamus under the Great Seal (the seal itself is not present), on permanent loan from Edinburgh City Council (Edinburgh City Archives, 'Historical Charter Number 65')

In 1617, James visited Scotland for the first time since assuming the throne of England. On 19 July, he invited the professors and regents of the university to engage in a disputation (debate) with him at Stirling Castle. According to Thomas Craufurd, he declared himself

so well satisfied with this day's exercise that I will be godfather to the Colledge [sic] of Edinburgh, and have it called the Colledge of King James; for, after the founding of it had been stopped for sundry years in my minority, so soon as I came to any knowledge I zealously held hand to it, and caused it be established; and although I see many look upon it with an evil eye, yet I will have them to know, that having given it this name, I have espoused its quarrell

In conformity with the King's wishes, an Act of the Scottish Parliament, 4 August 1621, ordained that the university henceforth be designated 'King James's College'. It bestowed on the Town Council and on 'the rectouris, regents, bursaries, and studentis' all the liberties, immunities, and privileges of a free college 'and that in als ample forme and lairge manner as anye Colledge he or bruikis within this his Majesties realme'.

Where James doubtless exaggerated his personal responsibility for establishing Edinburgh University (elsewhere he writes that 'we gave the first being and beginning there to'), he is rightly remembered as its chief founder, along with Bishop Robert Reid whose Will of 1557 provided funds to establish a college of higher education in the capital.