The Last Will and Testament of Robert Reid, Bishop of Orkney, included a bequest which would lead to the foundation of Edinburgh University in 1583.

Besides his ecclesiastical duties, Bishop Reid was a prominent member of Scotland's legal and political establishment. He served first as Senator and subsequently President of the College of Justice, and was a confidant of King James V. He therefore spent much time in the capital and resolved to benefit the city in his will. To this end, he bequeathed an endowment of 8000 merks ‘for to big [build] ane college’ in the Burgh of Edinburgh. It was to comprise of three schools: ‘ane thairof for the bairnis in Grammar, and uther for thame that leirnis poetre and oratore, […] the third scole for the techeing of the civile and canon lawis’. Sir Alexander Grant, the university’s most authoritative historian, notes that Reid’s vision was unusual in emphasizing rhetoric and poetry over the traditional philosophy-based curricula of existing universities, and in granting civil law equal status with canon law. Reid further stipulated that his bequest should fund chambers for the Regents (teaching staff), a college hall, and other necessary buildings.

Bishop Reid’s will was signed in Edinburgh in February 1557. He died the following year from an illness contracted on his return from a mission to Paris, where he witnessed the wedding of Mary, Queen of Scots with the Dauphin of France, and was one of the signatories to their marriage contract. A full quarter century would pass, however, before Reid’s bequest bore fruit.

Delay in Realizing the Bequest 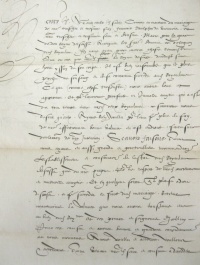 Draft of a document regarding the marriage of Mary, Queen of Scots, with the Dauphin of France and the succession to the kingdom of Scotland, Edinburgh University Library (Dc.4/83/1)

The delay was partly due to the religious revolution that led to the Reformation Parliament of 1560. There was a gap of some four years between the disestablishment of the Catholic Church and the appointment of new Commissaries who took over testamentary jurisdiction from the old spiritual tribunals. In the meantime, testamentary jurisdiction was suspended, and Bishop Reid's will was not produced for confirmation. A further factor, however, was the laxity of Bishop Reid's principal executors: his nephew Walter Reid, who succeeded him as Abbot of Kinloss, and a younger relative John Reid of Aikenhead.

Edinburgh remained a battlefield for competing religious and political factions during the five-year civil war that followed Mary’s abdication in 1568. When peace was restored in 1573, moves were finally made to open a college of higher learning. The scheme’s chief promoter was James Lawson (1538–1584), first minister of Edinburgh, who envisaged the creation of a divinity school designed to combat the Catholic teaching of continental seminaries. In 1576, eighteen years after Bishop Reid’s death, the Privy Council called on Walter Reid to produce the sum of 8000 merks, following a petition from the King’s Advocate. The call appears to have gone unanswered. The Town Council nonetheless pressed ahead with it scheme, setting up a committee in 1579 to investigate the possibility of siting a school first in or near the old Trinity Collegiate Kirk, and later at Kirk o’ Field.

Petition to the Privy Council and Enabling Charter

On 11 April 1582 the Town Council of Edinburgh presented a further petition to the Privy Council, sitting in Stirling under the Presidency of the young King James VI. The Council protested that the sum bequeathed by Bishop Reid remained unpaid and that all the persons assigned in his will to oversee the erection of the College were now dead. The Privy Council granted the Town Council the authority to act in their lieu and empowered them to recover the money and use it as stipulated by Reid. Three days later, on 14 April the Privy Council issued a charter empowering the Town Council to found a college and granting it complete control over appointment of teaching staff and admission. On the King’s advice, the Council appear to have reached a compromise with Reid, whereby he would consign 2500 merks out of 4000 merks of the legacy, the other 4000 being unrealisable. This was paid in two instalments, 700 merks in July 1583, three months before the opening of the University, and 1800 merks in 1587.