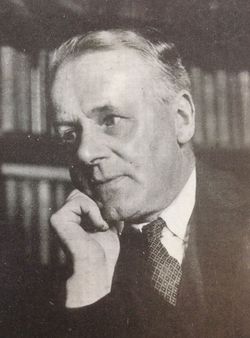 Sir James Drever (1873-1950) was the first Professor of Psychology at a Scottish university, holding the chair at Edinburgh from 1931 to 1944. He was a pioneer in the field of experimental psychology and child guidance.

Drever was an Orcadian, born in Balfour, on Shapinsay Island, and educated at Stromness Academy. He studied at Edinburgh University, graduating Master of Arts in 1893, with the intention of going on to qualify in medicine. After two years, however, deteriorating eyesight forced him to abandon his medical degree. For the next decade, he worked as a schoolteacher, pursuing scientific research in his spare time.

In 1905, Drever was invited to become assistant to Alexander Darroch (1862-1924), Professor of Education at Edinburgh University. It was in this post that he first developed an interest in experimental psychology. The University's Psychology department was founded in 1906 under William George Smith (1866-1918) as Combe Lecturer, and from that year onwards, it became compulsory for Scottish trainee teachers to complete a course in psychology. In 1912 Drever was given control of the first laboratory of experimental education in the United Kingdom. Here he inaugurated research into children’s vocabularies and conducted analytical studies of school subjects such as reading and writing. In 1916, Drever was awarded a D.Phil. for a dissertation which would subsequently be reworked for the monograph The Instinct in Man (1917). Following W. G. Smith's death, Drever was appointed Combe Lecturer and Head of the Psychology Department in 1919.

Drever's energy and pugnacity were instrumental in establishing an honours M.A. degree in Psychology, the first such course in Scotland. As his son and namesake James Drever (1910-1991) observed in an obituary notice, he had to overcome opposition from Norman Kemp Smith (1872-1958), Professor of Logic and Metaphysics, and Alfred Edward Taylor (1869-1945), Professor of Moral Philosophy, both of whom viewed the new discipline with some suspicion. Psychology was more easily accepted as a valid discipline by colleagues in the Faculty of Science who authorized the creation of an Honours B.Sc. in the subject.

Under Drever's leadership, the Psychology Department expanded to include: Mary Collins (1895-1989), an expert on colour vision, with whom Drever collaborated on a number of books; the psychoanalyst Ronald Fairbairn (1889-1964); and John Derg Sutherland (1905-1991), future Director of the Tavistock Clinic. In 1924, Drever was promoted to Reader in Psychology, and in 1931, he became the first holder of Edinburgh University's newly created Chair of Psychology. He occupied the Chair until 1944, when he was succeeded by his son.

Drever's most important publication is probably The Instinct in Man (1917), which brings contemporary biological knowledge to bear on the Scottish tradition of empirical psychology. Many of his other books and articles are of a semi-popular nature designed to heighten public understanding of psychology and dispel prejudices.

Drever believed that psychology had much to offer the community at large and was always concerned to move beyond theory and to explore the practical applications of his discipline. One of his earliest books was The Psychology of Industry (1921) which attracted considerable intention among employers. He subsequently devised a series of psychological tests to assess apprentices in the printing industry which was in use for over 20 years. Drever was amongst the first to research problems of juvenile delinquency and founded a Child Guidance Clinic in Edinburgh in 1925. He also conducted important research into the education of handicapped children. He developed a series of performance tests to assess the intelligence of pupils at schools for the deaf. As Chairman of the Royal Blind Asylum and School in Edinburgh, he not only helped guide policy on the education of blind children but was instrumental in setting up a training centre for war-blinded adults.

Drever was also deeply involved with both the Scottish Council for Research in Education (SCRE) and the Scottish Mental Survey of 1932, which employed the Moray House Tests devised by Sir Godfrey Thomson (1881-1955) and his Unit for Educational Research.

Drever's standing in the field of experimental psychology was reflected by his election as President of the Psychology Section of the British Association for the Advancement of Science (1926) and of the British Psychological Association (1935-1938). His global reputation is shown in his appointment as President of the Twelfth International Congress of Psychology. (Scheduled for 1940, the outbreak of war led to the congress being postponed until 1948, when Drever was too ill to officiate.)