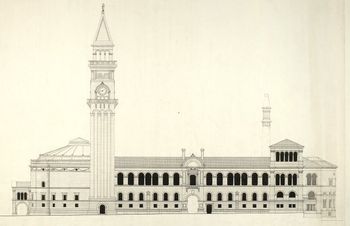 Early design for the Medical School - the campanile was never realised

The idea for new and improved medical buildings had been mooted since 1869 and Dundee industrialist Sir David Baxter of Kilmaron (1793–1872), who also endowed the Chair of Engineering, was to bequeath £20,000 to the University Building Scheme on his death. It was this bequest that allowed the 'General Building Committee and Acting Sub Committee' to start looking in earnest in Jan 1874 and a Public Meeting to raise funds was held in April 1874 in Edinburgh, with another in London in December of the same year. This public appeal raised £82,000 and an application was made to the Government for the rest of the money .

It was estimated that the cost of erecting the new buildings and purchasing the site would be £187,000. The Government voted the University £80,000 payable in four instalments, and further appeals increased the amount raised. The money was administered by Trustees after the parliamentary money was granted in 1874. Each time a new issue arose regarding the building work, a sub-committee was established, although they all reported back to the main building committee and so references to their activities are in the main run of minute books.

Between 1870 and 1874 three sites were considered for the new medical buildings. These were Chambers Street, the New Royal Infirmary grounds and Park Place and Teviot Row near Reid’s Music Room . A problem arose over a "servitude"in Park Place Lane and it was this site which was considered the most appropriate by 1874. Land had to be swapped with the City of Edinburgh Road Trustees in 1875 and also in 1875 a subcommittee was formed with the intention of removing any remaining servitudes over any part of the site. 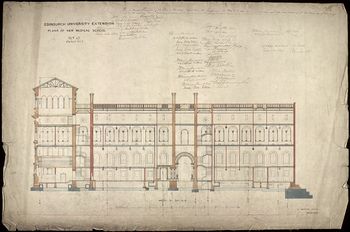 The sum needed was £12,000 but the University was unable to find this amount. A University deputation went to London to ask the Government to include this sum in the Parliamentary estimates for the year. The Treasury finally offered £8,000 in two instalments in Mar 1887, and William McEwan provided the other £4,000. In June 1888 it was revealed that the new building was to be called the McEwan Hall.