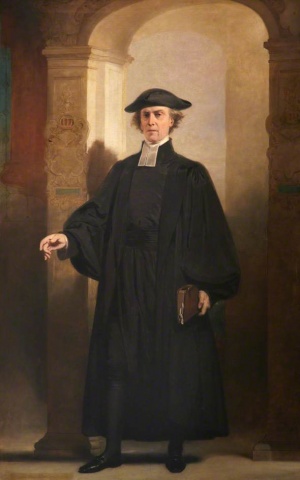 John Lee was born to James Lee and Helen Patterson at Torwoodlee-Mains, Stow, Midlothian in 1779. He was schooled in nearby Clovenfords before entering Edinburgh University at the age of 15. His family were of the Secessionist Church. As his family were of limited means, Lee supported himself at University by teaching, and stayed a furrther ten years completing full courses in Arts, Divinity and Medicine. He was awarded his M.D. in 1801. After a short period working in service of an army hospital he embarked on the study of law.

In 1804 he gained his license to preach and became the amanuensis of the Rev. Alexander Carlyle (1722-1805). When Carlyle died in 1805, Lee became one of the trustees of Carlyle's papers and, after debate amongst the trustees, was elected to edit and publish Carlyle's work, but the task was not completed and the papers were left unpublished until later in the century. In 1807 Lee was ordained as a minister of the Church of Scotland, and after a brief spell at the Scotch Church in London, became minister of Peebles until 1812 when he was appointed Professor of Church History at St. Mary's College, St. Andrews, to which he also became Rector. While being professor at St. Mary's College, he became Professor of Moral Philosophy at King's College in Aberdeen, conducting his lectures through a deputy. In 1821 he resigned from both professorships to become Minister of the Canongate Church, Edinburgh, as well as gaining a D.D. from St. Andrews. Four years later he became Minister of Lady Yester's Church in Edinburgh. By 1827 he had become Clerk to the General Assembly, and further, appointed Chaplain-in-Ordinary to the King in 1830. He became Minister to St. Giles Church in Edinburgh in 1834; and in 1837, he was briefly Principal of the United College of St. Andrews, before becoming Principal of St. Andrews University in 1839; and in 1840 became the Dean of Chapel Royal in Stirling.

In the latter part of his career Lee became embroiled in several disagreements with the Rev. Thomas Chalmers (1780-1847) primarily on social reforms and church politics. Chalmers opposed Lee for the appointment of Professor of Divinity at Edinburgh; and, though Chalmers initially recommended Lee for the post of Moderator of the General Assembly, subsequently opposed him as Lee had criticised Chalmers over plans for church extension. Again in 1837, when Lee applied for Moderatorship, Chalmers yet again opposed him by having him discredited. Lee instead moved away from Edinburgh to become Principal of the United College of St. Andrews. The two men clashed again over election to Principalship of Edinburgh University in which Lee succeeded. Following the Disruption in 1843, Lee remained with the Church of Scotland and took over Chalmers' Divinity lectures and eventually succeeded him in becoming Professor of Divinity whilst still acting as Principal. In 1844 he was successfully elected as Moderator of the General Assembly.

Lee played a significant role as a member of the Royal Commission on the Universities and Colleges of Scotland from 1826 to 1831, which was primarily set up because of the legal dispute between the Town Council of Edinburgh and the Senatus of the University. Their recommendations were incorporated into the Universities (Scotland) Act 1858, one of which stated that the office of Principal was no longer an ecclesiastical post, linked with the Church of Scotland, but be open to laymen and members of any church. This was certainly noticed by the election of Sir David Brewster (1781-1868) in 1859, who was a scientist and also a free churchman.

Out with his roles of academic or clergyman, Lee was a bibliophile, and had amassed an impressive collection of over 20,000 volumes. He was also unusual in that he had read the volumes in his collection and had acquired such a breadth and depth of knowledge that he could easily converse with any of other professors in their own subjects. Various stories are told of his collecting habits in Hill Burton's The Book Collector, where Lee is caricatured as Archdeacon Meadows.

Lee also edited tracts by D. Fergusson for the Bannatyne Club in 1860.