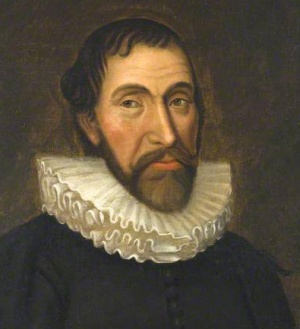 Alexander Henderson (c.1583–1646) served as Rector of Edinburgh University from 1640 until his death.

Henderson was one of the prominent figures of the Covenanting movement and amongst the Church of Scotland's most important theologians. He was born in Criech, Fife, and graduated MA from St Salvator’s College, Aberdeen in 1603. He was quickly appointed a Regent at Aberdeen University, teaching logic and rhetoric. He was licensed to preach in 1611 and became Minister of Leuchars in 1612. Henderson had hitherto held Episcopal views of church government, but was converted to a Presbyterian stance in 1615.

Henderson and the Covenanting Movement

In 1618, at the General Assembly of the Church of Scotland, Henderson led the opposition to the ‘Five Articles of Perth’, by which King James VI and I aimed to impose an Episcopal model on the Kirk. Little is known of his activities over the next twenty years, but in 1637, he headed a campaign to reject the new Anglican-leaning Scottish Prayer Book, culminating in the Edinburgh Prayer Book Riot of 23 July. On 12 February 1638, Henderson and Archibald Johnston, Lord Wariston were tasked with drawing up a new National Covenant in defence of the Reformed religion. The Covenant was signed by a large gathering in the kirkyard of Greyfriars Kirk in Edinburgh, on 28 February 1638, and copies were sent around the country for signing. Subscribers swore to maintain religion in the form established in the National Covenant of 1581 and reject all innovations introduced since then, but also to remain loyal to the King.

In March 1638, Henderson and Wariston drafted the paper, 'The Least that Can Be Asked to Settle the Church and Kingdom in a Solid and Durable Peace', which demanded a free General Assembly and the withdrawal of both the Prayer Book and the Articles of Perth. Henderson subsequently led the Covenanters’ negotiations with the King’s Commissioner, the Marquess of Hamilton, defending their refusal to hand over the subscribed covenants. The first General Assembly since 1618 opened at Glasgow on 21 November with Henderson as Moderator. The General Assembly declared null the general assemblies of 1606 to 1616, abjured the five articles of Perth, abolished episcopacy, and deposed the bishops.

In January 1639 Henderson left Leuchars to become minister of St Giles in Edinburgh. As the King prepared for war, Henderson drafted the paper ‘The Remonstrance of the Nobility, Barons, Burgesses, Ministers and Commons, within the Kingdom of Scotland’, which generated much support for the Covenanters. Another widely-circulated manuscript tract by Henderson, ‘Instructions for Defensive arms’ argued that the people could legitimately take up arms against a ruler who broke the terms of his covenant with them. In June 1639, Henderson was among the Scottish commissioners who negotiated the ‘Pacification of Berwick’ with Charles I, bringing to an end the First Bishops’ War, and referring all disputed questions to the General Assembly and the Scottish Parliament.

In 1640 he published two tracts defending the Scottish invasion of Northern England in the Second Bishops' War. Again, he participated in the peace negotiations leading to the signing of the Treaty of Ripon, which ceded Northumberland and County Durham to Scotland. After the Covenanter army had occupied Newcastle, Henderson participated in the peace negotiations of October which culminated in the signing of the treaty of Ripon. Between November 1640 and July 1641, Henderson was in London where he preached to English Puritans and wrote the final draft of the Scottish demand for war reparations. He also wrote papers arguing for uniformity of religion and church government in England and Scotland, urging both to adopt Presbyterianism.

He continued to campaign for British uniformity on his return to Scotland in 1641. On 14 August, Charles I arrived in Edinburgh and Henderson was appointed Chaplain to the King (with whom he appears to have enjoyed good personal relations) and Dean of the Chapel Royal at Holyrood. In June 1643, Henderson went to Stirling in an unsuccessful attempt to dissuade the Earl of Montrose from breaking with the Covenanter movement. In August 1643 he was again elected Moderater of the General Assembly and negotiated with commissioners from the English Parliament and Westminister Assembly in an effort to create a Covenanter-Parliamentarian alliance. 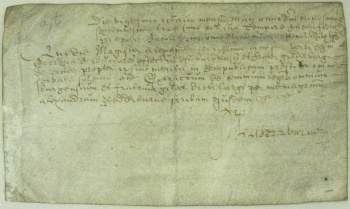 In September 1643, Henderson arrived in London as one of the Scottish commissioners to the Westminster Assembly of Divines, which had been appointed to restructure the Church of England. For the next three years, Henderson argued strenuously for the adoption of the Scottish model of church governance and worked on drawing up a Catechism and Confession. In January 1645, Henderson was appointed to assist the commissioners of the English and Scottish parliaments in their ultimately unsuccessful negotiations with the King and Episcopalian divines at Uxbridge.

When the First English Civil War ended with Charles surrendering to a Scottish army in May 1646, Henderson was sent to Newcastle to persuade him to accept the Solemn League and Covenant. Contemporary observers felt that these fruitless negotiations fatally undermined Henderson’s fragile health. He died in Edinburgh on 19 August 1646, and was buried in Greyfriars Churchyard.

In January 1640 Henderson was elected Rector of Edinburgh University, a position to which he was re-elected annually until his death. Although constantly occupied by Church and state affairs, he performed many great services for the University. He was particularly successful at securing funds. In 1640, he raised a loan of £21,777 on the security of the Town, and, in 1641, persuaded the Scottish Parliament to assign the rents of the Bishoprics of Edinburgh and Orkney to the University. By his advice John Fleming bestowed 4000 merks for college buildings in 1642, and his fellow merchant David Graham bequeathed 7000 merks in 1646 towards the construction of a new University Library. Work had begun on the new library building in 1644, and Henderson purchased books for it while in London.

Henderson was also the prime mover behind two resolutions of the General Assembly of the Church of Scotland leading to university reform. In 1642 the General Assembly ruled that, given the current scarcity of Professors of Divinity, universities should look abroad for suitable candidates. In 1645, the General Assembly approved 'Overtures for advancement of learning and good order in Grammar Schools and Colleges', which insisted on more careful examination for degrees, non-promotion to higher classes of insufficiently prepared students, non-reception from one college to another without certifiate, and greater uniformity between the universities of Scotland. Henderson also encouraged the appointment of a first Professor of Hebrew, Julius Conradus Otto in 1642.

He was the ablest educationist and the man of clearest insight of all who had had to do with the College since its foundation. He saw what was wanted, and had the energy and the tact necessary for securing it. It would have been an inestimable advantage for the Universities of Scotland if his life could have been prolonged for twenty years.