Election of Gordon Brown as Rector, 1972 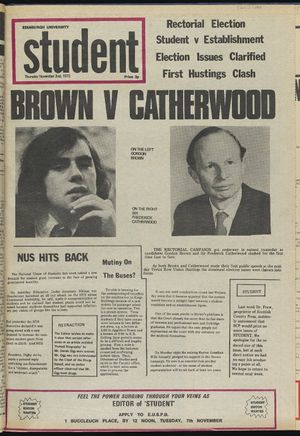 Front Page of The Student during Brown's Rectorial campaign

The late 1960s and early 1970s were a period of intense student militancy at Edinburgh University, centring on two causes: the demand that the university cut all financial ties with the Apartheid regime of South Africa and a call for greater student participation in university governance. These issues first came to prominence during the Rectorship of Kenneth Allsop (1968-1971) who was broadly supportive of student aspirations. Students demonstrated against the touring South African rugby team at Murrayfield Stadium in 1970, persuaded the University to sell its shares in South African companies, and urged it to cease investing in companies that did business in South Africa. At the same time, the Student Rector Campaign gained momentum, arguing that the only way for students to gain a voice on the University Court was to elect one of its own number as Rector. The Campaign triumphed with the election of student Jonathan Wills in 1971.

As Rector and ex officio Chair of the University Court, Wills clashed repeatedly with Principal Sir Michael Swann (1920-1990), University Secretary Charles H. Stewart (1910-1981), and Chancellor's Assessor John Cameron (1900-1996). Points of controversy included Wills's requests that student observers be present at Court meetings, that Court Minutes no longer be confidential, that he be permitted to access politically sensitive files on university finance, and that the university sell shares in companies that continued to maintain business links with South Africa. He also protested the Court's decision to ban Allan Drummond, President of the Students' Representative Council, from attending Court meetings after he had participated in a sit-in at the university's administrative offices.

Wills held office for one year only (as promised in his campaign), resigning to complete his Ph.D. in Geography. His successor was another postgraduate student, Gordon Brown, who was working on a thesis in Scottish History. Brown easily defeated the only other Rectorial Candidate, Sir Fred Catherwood, former Director-General of the National Economic Development Council. Almost 200 students (5.6% of the electorate), however, deliberately spoilt their ballot papers, to protest a perceived lack of transparency in the nomination of Brown as the 'student rector' candidate.

Brown's Rectorship was perhaps the most eventful in the University's history. He came into conflict with the University Court on the following issues:

Shortly after Brown's election, the University Court carried a motion demanding that the Rector no longer have the right to chair meetings of the Court. Several attempts were then made to oust Brown from the chair, the most serious, in 1973, proposing that the chairperson be elected annually by the Court itself. This was successfully resisted by a student petition that was backed by the General Council, the newly formed Edinburgh University Students' Association, the university's non-academic staff, the Edinburgh Section of the Association of University Teachers, and the Town Council.

Brown was the last of the student rectors. The 1975 election brought a return to celebrity rectors, with the choice of television personality and journalist Magnus Magnusson (1929-2007). During Magnusson's tenure, an agreement was reached between the Students' Representative Council and the University Court. The Court agreed to keeping the Rector as its Chair, and, in return, the SRC agreed to ban students from standing for the post. Two other major changes were made: