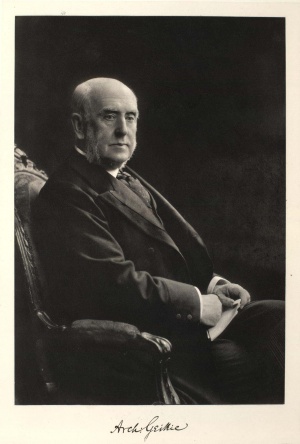 Sir Archibald Geikie was born at Edinburgh in 1835, the son of John Stuart Geikie, businessman, and composer, and Isabella Thom. He married Alice Gabrielle Pignatel in 1871. His education was at Black's school, then Edinburgh High School and he showed a great aptitude for study and his interest in science was furthered in the direction of geology when he and his friends discovered fossils at Burdiehouse quarries. Geikie was influenced by scientists such as naturalist John Fleming, to whom he was introduced by his father, and by the many books on geolgy which he consumed, most notably Hugh Miller's Old Red Sandstone.

Geikie's professional life began initially in banking, which he did not enjoy and 1851 saw his a newspaper publication of his Three Weeks in Arran by a Young Geologist, which led to an introduction to Hugh Miller. He also became acquainted with publisher Alexander Macmillan, geologist James David Forbes and Andrew Crombie Ramsay.

The banking career abandoned, he matriculated at the University of Edinburgh in 1854 but had to leave the following year for financial reasons. A recommendation by both Miller and Ramsay to Sir Roderick Impey Murchison, newly appointed head of the Geological Survey, secured Geikie a position there as mapping assistant. The following years saw him make the acquaintance of distinguished scientists such as Leonard Horner and Sir Charles Lyell.

His official work was supplemented by research during his holiday time, travelling throughout the British Isles and Europe. 1867 saw him appointed director of the newly created branch, the Scottish Geological Survey. When Murchison founded the chair of geology in 1870 at the University of Edinburgh, Geikie was his choice as professor and he was appointed the following year.

Geikie's field and research work took him all over the British Isles and to many parts of Europe. He successfully combined his duties to both posts as well as devoting time to private research and writing. As well as his scientific writings, Geikie wrote several well-known biographical and historical books including Memoirs of Sir Roderick Impey Murchison (1875), Andrew Crombie Ramsay (1895), Edward Forbes (1861), and Founders of Geology (1897). 1924 saw the publication of his own autobiography.

He went on to succeed Sir Andrew Crombie Ramsay as head of the Geological Survey of Great Britain in 1881, which he held until his retiral in 1901. This saw him relocate to London and take a more active role in many scientific societies. Those relating to the Royal Society, he took particular interest in after his retiral, serving as secretary and president.

His brother was James Geikie (1839-1915), who succeeded Sir Archibald as Professor of Geology at the University of Edinburgh in 1882.

Account of the Progress of the Geological Survey in Scotland, (1865)

Geological Sketches at Home and Abroad, ( 1882)

Classbook of Geology; Illustrated with Woodcuts, (1886)

History of the Geography of Scotland; with Maps and Illustrations, (1906)

Annals of the Royal Society Club: the Record of a London Dining-Club in the Eighteenth and Nineteenth Centuries, ( 1917)

1870: Appointed First Professor of Geology, the University of Edinburgh

Archibald Geikie in the Archives Catalogue

Archibald Geikie in the Library Catalogue