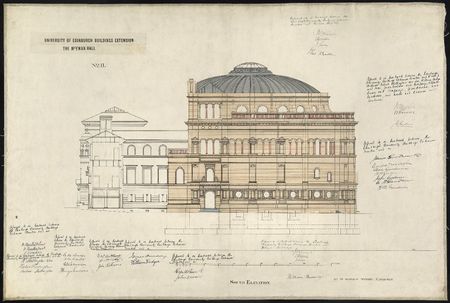 University of Edinburgh Buildings Extension, the McEwan Hall, no. 91 (RRA 2.1)

McEwan Hall, the graduating hall of the University of Edinburgh, designed by Sir Robert Rowand Anderson (1834-1921), was opened in 1897.

Until the end of the 19th century, Edinburgh University had no discrete hall for graduation or other university ceremonies. Before the Universities (Scotland) Act 1858, the number of students graduating was small, and graduations could easily be held in one of the University's classrooms. The passing of the act, however, saw a huge increase both in the size of the student populace and in the percentage of students actually graduationg. The University was increasingly forced to hire external venues like Assembly Hall. This was clearly unsatisfactory, and in 1874 the University sought funding for a graduation hall which was incorporated into Sir Robert Rowand Anderson's plan for a new Medical School. A public appeal raised £82,000 and an application was made to the Government for the rest of the money. The Government voted the University £80,000 but on condition that the the graduation hall be dropped from the plan.

The exterior of the was completed in 1894. A further three years works were required to complete the Italian Renaissance-style interior which features murals by William M. Palin (1862-1947). The room was also equipped by an organ built by Robert Hope-Jones (1859-1914). McEwan handed the building over to the university in 1897.

Other University Events in 1897