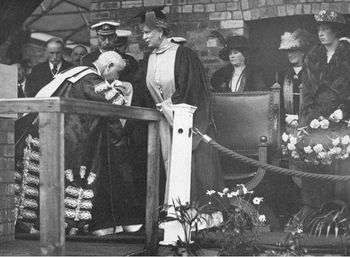 Laying of the Foundation Stone at by King George V, 1920.

The immediate aftermath of the First World War saw a major expansion in the campus with the purchase of West Mains Farm in 1919. Of its 115 acres, around 90 were turned over for the development of the King's Buildings campus (the remainder leased out as a golf course. On 6 July 1920, King George V laid the foundation of the first new building, for the Department of Chemistry (now called the Joseph Black Building. In his speech he referred to "a world devastated by the ravages of war" and that, "we pin our faith upon the possibilities emerging from the progressive application of science to the service of man". 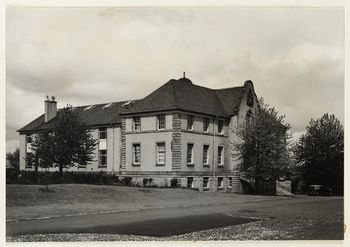 Work in the new Chemistry began in 1919 and it was open for use in 1922 (officially opened 2 years later). Sir James Walker (1863-1965) was criticised for including 30 small rooms for research staff but was ultimately proved correct. He was also proved correct in having a design which facilitated extension upwards. This building was also home to Animal Genetics, from 1924 until its own building (now the Crew Building) opened in 1930.

The Zoology building filled the north-east corner site, and was completed in 1929. It was funded by an (originally) anonymous donation of £20,00 from Laurence Pullar of Bridge of Earn and grants of £18,00 and £74,000 from the Carnegie Trust and International Educational Board respectively.

Ready for use in March 1930, this was funded partly by the International Educational Board. Along with the main building, there were associated ones to house the variety of animals involved. 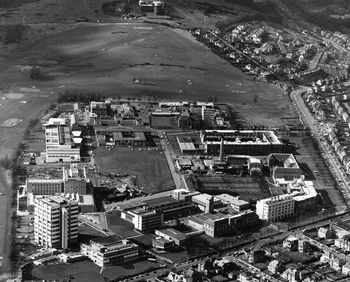 Geology initially moved from Old College into temporary accommodation provided by huts at King's Buildings. These had previously been used to provide wartime accommodation for US soldiers in St. Andrews Square but were purchased by the University in 1912 and moved to the King's Buildings campus. A donation of £50,000 from Sir Alexander Grant provided the funds for a proper building and the Grant Institute of Geology was officially opened on 28 January 1932 by Prime Minister James Ramsay MacDonald.

Part of bequest of £50,000 from James Sanderson of Galashiels provided the funding required for a new Engineering building.. The official opening by Prime Minister James Ramsay Macdonald, took place on 28 January 1932.

Initial accommodation had been provided in various huts which Geology had been using up to 1931. In 1939, the new building was opened by Sir William Bragg.