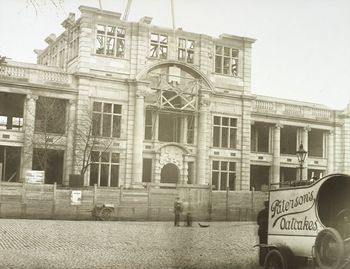 In 1951 the Royal (Dick) Veterinary College was reconstituted as part of the University of Edinburgh.

It was originally set up as the Highland Society's Veterinary School by William Dick (1793-1866) in 1823. In 1833, it moved into purpose-built premises in Clyde Street, and in 1839 became a College, with Dick appointed Professor. The Veterinary school rapidly developed an international reputation attracting students from all over the world. It was bequeathed in Dick's will to the Town Council of Edinburgh in 1866. Seven years later it was officially renamed Dick's Veterinary College to distinguish it from a rival Veterinary College established by William Williams (1832-1900). In 1906, it was incorporated by Act of Parliament as the the Royal (Dick) Veterinary College.

By 1916, the college had expanded sufficiently to move into a new custom-built building at Summerhall. Following the Second World War, steps were taken to integrate the College into Edinburgh University. These culminated in 1951 when it became a consistent part of the University within the Faculty of Medicine and was renamed the Royal (Dick) School of Veterinary Studies. The degree of BSc in Veterinary Science was replaced by the new degrees of BVMS and DVMS. In 1964 the University created a Faculty of Veterinary Medicine.

Other University Events in 1951