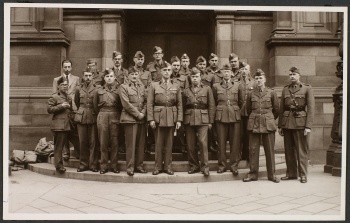 Staff and students at the Polish School of Medicine (1940s)

Although originally intended to meet the needs of students and doctors in the Polish armed forces, the School opened its doors to civilians from the outset. Students followed a Polish curriculum, were taught mainly in Polish, and were awarded a Polish degree. By the time the school closed in 1949, over 336 students had matriculated. 227 had graduated with a medical diploma (MBChB) and 19 obtained a doctorate or MD.

Only a few graduates returned to Poland after the war - most remained in Britain. Some emigrated to the US, Canada, Australia and elsewhere. Ties between the University of Edinburgh and graduates of the school and their families persist.

Interlinked are the core records of the school itself along with the papers amassed by Wiktor Tomaszewski.