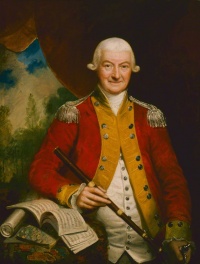 The son of Alexander Robertson of Straloch in Perthshire, John Robertson or Reid was educated at the University of Edinburgh and received a commission in Lord Loudon's regiment of Highlanders in 1745; he subsequently adopted his mother's maiden name as his own, she being a Reid of Straloch. He served with the regiment on the Hanoverian side during the 1745 rebellion, and afterwards in the Netherlands, Martinique, and British North America. He purchased some 35,000 acres in Vermont, which were seized by settlers from New England in 1774, and he lost his claim to them at the outbreak of the American War of Independence in 1776.

He returned to London, where he was promoted to the rank of General, and died in 1807. A good flautist and composer, especially of music for wind bands, his best-remembered tune today is 'In the Garb of Old Gaul'.

In spite of his losses he left a sum of over £50,000 for the founding of a Chair of Music at the University of Edinburgh, the money to be further applied to the purchase of a library or for any other proper purpose. The Chair was established in 1839, after the death of his daughter who had a life-interest in the estate, and £400 per annum was put to the purchase of rare and costly books for the University Library. These have included early printed and finely illustrated books and mediaeval MSS. Originally these were shelved in the Reid Room in Old College, which was reserved for the use of professors and senior lecturers. This was the first fund available to the Library for purchasing historical research volumes that were not simply textbooks.

All or some of the text on this page originally appeared in the Gallery of Benefactors
Retrieved from ‘https://ourhistory.is.ed.ac.uk/index.php?title=John_Reid_(1721-1807)&oldid=4202’
Categories: