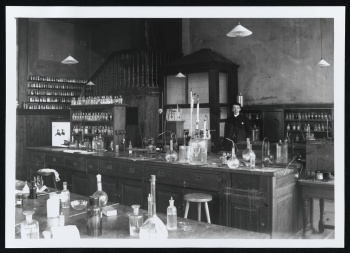 Clerk Ranken in a Chemistry laboratory

Clerk Ranken was born in 1880, Edinburgh. Educated at George Heriot’s School, he then went to Edinburgh University, graduating BSc (Pure Science) in 1902, then DSc in 1907 (Thesis title: The Viscosity of aqueous solutions). He was recipient of both the Hope Prize and Mackay Smith Scholarships. At the age of only 21 he read a paper before the Royal Society of Edinburgh.

As a Carnegie Fellow, he worked with Georg Bredig at Heidelberg University. On his return from Germany he became lecturer in Chemistry at the Heriot-Watt College, Edinburgh, and later Assistant Professor in Chemistry. In 1917 he left academia to take up as post with Messrs. T. & J. Bernard, Ltd., the Edinburgh brewers.