Foundation of Polish School of Medicine, 1941 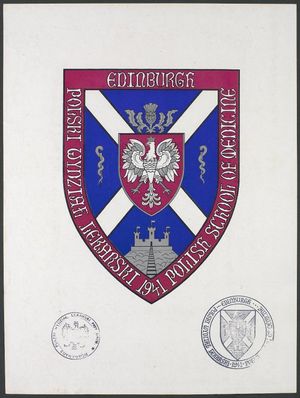 Coat of arms of the Polish School of Medicine

The foundation of the Polish School of Medicine in March 1941 was a unique wartime academic initiative by the University of Edinburgh and the Polish Government in Exile. It was initially designed to serve the needs of some 20,000 Polish troops who had taken refuge in Britain following the Nazi occupation of Poland and subsequent fall of France. The idea of a Polish medical school as a part of the University of Edinburgh came from Francis Albert Eley Crew (1886-1973) who was Professor of Animal Genetics at the university and Commanding Officer of the Military Hospital at Edinburgh Castle. Also involved from the university side were the Dean of the Medical Faculty, Professor Sir Sydney Alfred Smith (1883-1969) and Sir Thomas Henry Holland (1868-1947), the Principal of the University. The Polish Government were represented by Prime Minister General Władysław Eugeniusz Sikorski (1881-1943) and Lt.Col. Dr Antoni Tomasz Jurasz (1882-1961), Professor of Surgery at the University of Poznań, who became the main organiser and first Dean of the School. Although originally intended to meet the needs of students and doctors in the Polish armed forces, the School opened its doors to civilians from the outset. Students followed a Polish curriculum, were taught mainly in Polish, and were awarded a Polish degree. By the time the school closed in 1949, over 336 students had matriculated. 227 had graduated with a medical diploma (MBChB) and 19 obtained a doctorate or MD.