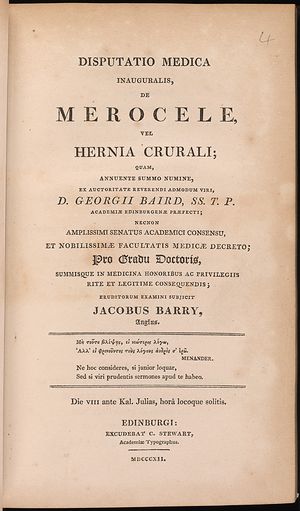 Margaret Bulkley was born in Ireland: a bright, precocious child, she moved to London, with her mother in 1805 and there had access to General Francisco de Miranda’s library with ‘treatises such as might be considered to form a tolerably complete Medical Library for a private gentleman’. As her father had been declared bankrupt, she had no hope of a good marriage so it was decided she should go to university but this was not an option for a female.

Taking the name of James Barry (after an uncle), Barry went to study medicine, at Edinburgh University, one of the most demanding and rigorous courses in Britain. Barry graduated with a MD thesis dedicated to patrons, General Francisco de Miranda and David Steuart Erskine, 11th Earl of Buchan (1742-1829). Then, even more extraordinary, after further training, Barry joined the army and travelled throughout the British Empire. There is no definitive version of Barry's adopted name.

Although known to be tetchy, difficult and insubordinate, with a slight figure and high voice, Surgeon-General McKinnon said Barry was a ‘pleasant and agreeable man. He neither cursed nor swore, but behaved himself like a gentleman’. Barry became a close friend to General Lord Charles Somerset, Governor of the Cape Province, having saved both his life and one of his daughters. But rumours arose of a homosexual relationship between Somerset and Barry and Somerset was recalled to Britain, although nothing further happened. Although sent home on many occasions for her actions, Barry was recognised as a fine physician, credited with a general improvement in medical health of soldiers and known to be a highly skilled and much respected surgeon.

1816: posted to Cape of Good Hope as Assistant Staff Surgeon

1817: appointed Physician to the Household of the Governor of the Cape

1826: carried out the first successful Caesarean section in the English-speaking world

1829: arrived Mauritius to deal with outbreak of cholera

1831: April sailed for Jamaica as Staff Surgeon to the garrison

1835: left for England after considerable stress and the deaths of many troops due to fever and appalling conditions of the garrisons positioned near swamps

1836: posted to St Helena as Principal Medical Officer to cope with an epidemic of dysentery

1838: November, given command of The Windward and Leeward Islands where high death rate from yellow fever and chronic dysentery

1857: June, left Mediterranean and posted to Canada as Inspector-General of Hospitals