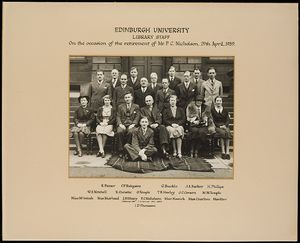 F. C. Nicholson in a group of Library staff, on the occasion of his retiral in 1939

Nicholson was educated in Aberdeen, where his father was Professor of Natural History, and at Christ's College, Cambridge, where he took the Classical Tripos and a First in Mediaeval and Modern Languages. After graduating he joined the staff of Aberdeen University Library, followed by the Library of the Royal College of Physicians of Edinburgh before succeeding the poet and former railway surfaceman Alexander Anderson (1845-1909) as Librarian of the University of Edinburgh in 1910. A man of wide learning (Sir Herbert Grierson once said of him that he 'might have occupied several of the University Chairs with distinction'), his scholastic legacy to the library and the University were the printed catalogue of the printed books in the Library (3 volumes, 1918-1923) which was ranked with those of the British Museum, the Bibliothèque Nationale and the London Library as the four greatest European library catalogues of their day.

His term as Librarian also saw the publication of the printed catalogues of the Library's collections of Western mediaeval (1923) and Oriental manuscripts (1925). On his retiral in 1939 the University awarded him the honorary degree of LLD.

In 1958 Nicholson presented to the Library 24 letters of the Scottish lawyer, Whig politican and writer Francis Jeffrey (who with the Reverend Sydney Smith founded "The Edinburgh Review" in 1805. After his retirement heand his wife became friendly with the poet Walter De La Mare. In 1963 Mrs Nicholson presented to the Library over 90 letters from De La Mare to Nicholson and to Miss J. G. Sime. The Library has since acquired further letters in this correspondence.

All or some of the text on this page originally appeared in the Gallery of Benefactors
Retrieved from ‘https://ourhistory.is.ed.ac.uk/index.php?title=Frank_Carr_Nicholson_(1875-1962)&oldid=3323’
Categories: