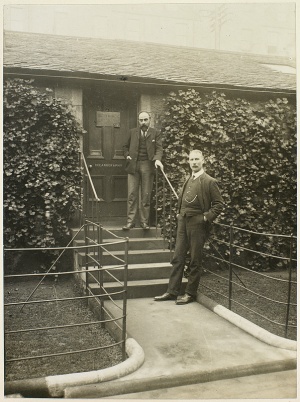 Educated at the University of Edinburgh (where he was later the George Heriot Research Fellow 1900-1901, he became the Director of the Scottish Oceanographical Laboratory. He lectured on geography at Heriot-Watt College (now Heriot-Watt University) 1899-1901 and from 1917 until his death, and at the Church of Scotland Training College, Edinburgh.

Bruce studied at Norfolk County School, before reading medicine at the University of Edinburgh, but gave up his studies in 1892, before he qualified as a doctor, in order to take part in a whaling expedition to the oceans surrounding the Falklands. Though he was, officially, ship's surgeon, he spent most of his time sealing and making 2-hourly meteorological observations over a 3-month period - the evidence gained in these observations of the weather giving the first ever evidence of the Antarctic anticyclone.

For several years, Bruce perfected his scientific technique at the meteorological observatory on Ben Nevis. Then, over a periond of about 20 years, he made repeated visits to the arctic island of Spitsbergen in the Svalbard archipelago, in association with the prince of Monaco. He became the major expert on the area, having carried out meteorological, zoological, geological and geographical surveys of the island. These led to the economic development of the archipelago, mainly for coal mining. Bruce also carried out ornithological work there, discovering new species of arctic bird, and discovering more about known species - he was, for example, the first to find chicks of the sanderling, on Spitsbergen.

The expedition for which he is remembered, however, is the remarkably successful Scottish National Antarctic Expedition of 1902-1904. The observations made by this expedition completely changed the way Antarctica was seen, from a geographical point of view, as well as the way the surrounding islands were seen from a zoological perspective. During this trip, a base was set up on South Georgia, a new area, Coats Land (named in honour of the Coats brothers, who had bankrolled the enterprise) was discovered and 1100 species of animal were catalogued, 212 of them previously unknown to science. The seas around the Antarctic were explored in the yacht 'Scotia'.

Bruce did not, however, always enjoy the good luck that made the Antarctic expedition such a success. In 1907, Bruce founded the Scottish Oceanographical Laboratory, an organisation he had great ambitions for, hoping it would one day challenge Monaco as a centre for oceanographical sciences. However, it was not to be, and it was disbanded in 1920, the year before his death, due to his ill health, and the lack of other people of Bruce's stature to continue the work. In 1910-1911, Bruce tried to raise funds for a second Antarctic expedition, but this enterprise too would end in failure. A whaling business he managed in the Seychelles from 1914 failed too, killed off by the outbreak of war.

Honoured by several learned societies for his work, he did not publish widely nor attempt to publicise his work, and it is perhaps this, along with the lack of spectacular upsets like those that dogged Scott and Shackleton's polar expeditions, that meant Bruce has been largely forgotten by the public.

Bruce was influenced by James Cossar Ewart (1851-1933) at the University of Edinburgh (1851-1933). His Antarctic expedition was funded by the Coates brothers, textile manufacturers from Glasgow.

He bequeathed to Edinburgh University Library ca 1,000 volumes, 2,000-3,000 pamphlets and offprints, files and albums of illustrative matter, and ca 30 albums of news cuttings, on Arctic and Antarctic exploration.

All or some of the text on this page originally appeared in the Gallery of Benefactors
Retrieved from "http://ourhistory.is.ed.ac.uk/index.php?title=William_Speirs_Bruce_(1867-1921)&oldid=2735"
Categories: