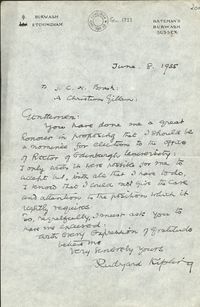 Born in Bombay and schooled in Devon, Rudyard Kipling became possibly the most popular poet and short-story teller in the world during his lifetime. The University of Edinburgh awarded him a DLitt in 1920, and the students of the University of St Andrews elected him Rector in 1922; sadly, he declined an invitation to stand for election as Rector of Edinburgh University in 1935.

All or some of the text on this page originally appeared in the Gallery of Benefactors
He won the Nobel Prize for Literature in 1907, the Gold Medal of the Royal Society of Literature in in 1926, and was elected the first Foreign Associate Member of the Académie Française in 1933. His few novels are no less carefully constructed than his other writings and one, The Naulahka (1892), was written in collaboration with his future brother-in-law, Wolcott Balestier.

After his death in 1936 his wife Caroline Kipling (née Balestier) presented the University with a volume of her husband's manuscripts, which includes the collection of short stories A Diversity of Creatures (published 1917) and The Eyes of Asia (published 1917) 'as if they had been gifted by the poet'.