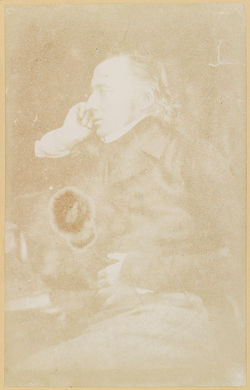 Blackie was one of one of the best-known Scotsmen of his time. Born in Glasgow and educated in Aberdeen, his first degree from Marischal College, Aberdeen was followed by three 'Wanderjahre' spent at the Universities of Göttingen and Berlin and in Rome. These gave him a life-long love, first of the German language, German student life, songs and culture, and secondly of the Greek language and antiquity. The first were later to inform several of his own books, notably Musa burschicosa (1869),War songs of the Germans (1870) and Scottish song (1889) as well as the initial compilation of "The Scottish Students' Song Book" (1891), of which his nephew Archibald Stoddart-Walker was one of the first editors. Declining to enter the church he took a law degree at the University of Edinburgh and joined the Scottish bar.

In 1839 was appointed Professor of Humanity at Marischal College, Aberdeen and in 1860 he achieved his ambition when he was appointed to the Greek at the University of Edinburgh. At Edinburgh he became a charismatic teacher and a popular lecturer on many subjects. He espoused the causes of educational reform and the Gaelic language, and almost single-handed raised the £12,000 needed to endow the new Celtic at Edinburgh.

His death was the occasion for a national day of mourning, and his funeral stopped the City of Edinburgh in its tracks. To the University Library he bequeathed around 250 volumes of 19th-century Greek books on various subjects from his library.

All or some of the text on this page originally appeared in the Gallery of Benefactors
Retrieved from "http://ourhistory.is.ed.ac.uk/index.php?title=John_Stuart_Blackie_(1809-1895)&oldid=6926"
Categories: